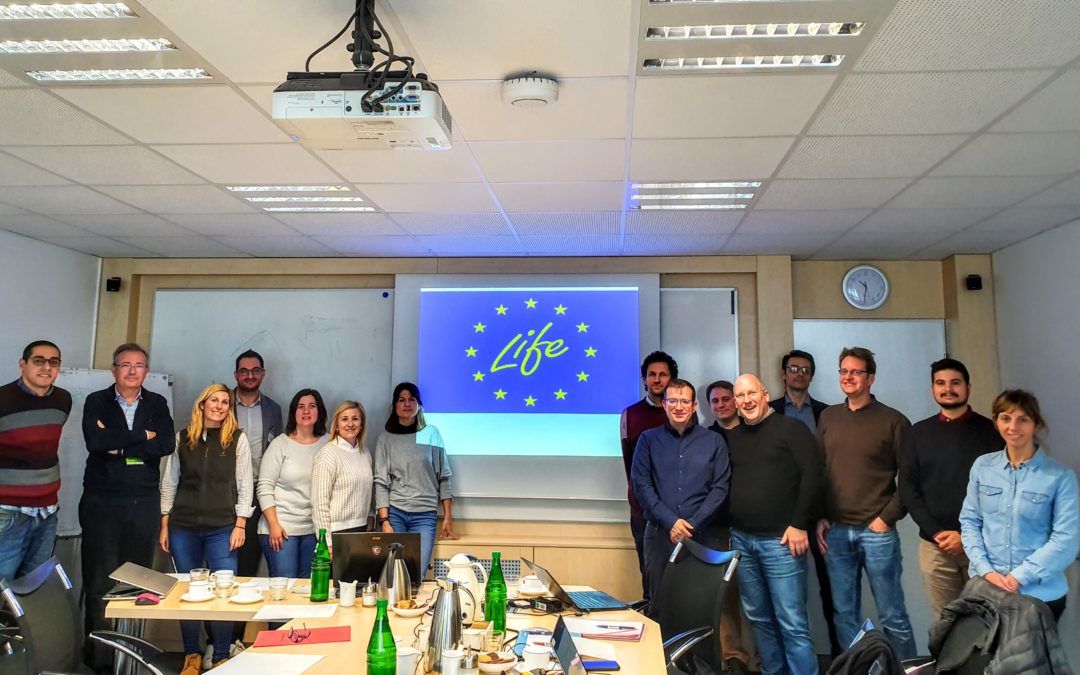 The third project meeting of LIFE RESILIENT FORESTS was held last november in the town of Jülich, Germany. The project is developing a software which will support decision makers in the choice of optimal forest management systems, in order to maximize forest ecosystem services.

We are very satisfied with the progress of the project, the work of the first year is very positive both for the initial results and for the engagement of the partners and the interests that we are receiving from stakeholders. These are main considerations made by the project partners after the third project meeting which was held on 12 and 13 of November in Juelich (Germany), whose aim was to understand the state of executuon of the work in orde to plan the next steps for 2020.

During the meeting all partners shared the latest advancements in each task of the project and discussed how to improve the Decision Support System tool.

During the meeting all partners shared the latest advancements in each task of the project, they discussed how to improve the Decision Support System tool which is under development and in particuar the the variables which will be incorporated in the tool. The software will determine which type of forest management is optimal in order to maximize the economic viability of forest ecosystem services. For this reason we have selected water, biomass, fire risk and climate resilience as the main indicators for the tool. At the meeting in Germany we defined the variables which must include those final indicators, explained María González, IIAMA researcher and project partner.

Regarding fire risk, partners agreed that the model will include the Canadian Fire Weather Index, together with other indicators such as the fire intensity, speed of propagation, vertical-horizontal transition and the tree survival probability These variables will be linked to the costs of fire extinction and restoratioon, in order estimate the economic benefit of forest management, explained María.

Partners also agreed that the climate change projections at European level and at the catchment scale will be observed, in addition to how these will affect the different scenarios of water resource availability. A repository of climate projections at regional scale will be also created. The researchers of IIAMA  Instituto de Ingeniería del Agua y Medio Ambiente de la Universitat Politècnica de València (IIAMA-UPV) presented the main technical characteristis of the DSS tool which is under development and which will be calibrated in relation to the specific features of each catchement, keeping climate change resilience as the common factor.

“ The model will be applied to the Carraixet catchment first, and then it will be replicated in the catchment of Turia, as well as in other selected areas in Portugal and in Germany”, María González said. We expect a beta version of the complete software to be fully available by the end of 2020.

The partners foresee to have a fully usable beta version of the DSS tool available by the end of 2020, the second year of the project. In this way, the tool will be presented to different audiences, including public authorities, forest management companies and professionals. “One of the objectives of this research is the transferability and applicability of the results. For this reason, during the initial phase of the project we organized a series of meetings to present the project and to increase the collaboration with technical experts through the forumlation of interactive questionnaires, whose evaluation will feed into the configuration of the DSS tool, said María.

On the second day of the meeting partners also had the opportunity to visit the Wüstebach forest catchment managed by RESILIENT FORESTS partners of the Jülich  Forschingszentrum. The site is located inside the Eifel National Park and covers an area of 38.5 ha, with mean altitude of about 610 m. The mean annual precipitation is about 1200 mm. The Wüstebach catchment is part of the Lower Rhine Valley-Eifel observatory of TERENO (a network of terrestrial environmental observatories).

Norway Spruce planted in 1946 is the prevailing vegetation type that was established for timber production after World War II. During late summer/early autumn of 2013, trees were almost completely removed in an area of 9 ha by the national park forest management to promote the natural regeneration of near-natural beech forest. Within this context, the effects of such a disturbance on forest ecosystem functioning are currently investigated in a deforestation experiment in the Wüstebach catchment. The deforestation of about 9 ha of Spruce forest took place in summer 2013.

This experimental site was established in 2004 in order to investigate the effects of deforestation on the ecosystem, hydrological and biogeochemical processes using an integrated observation approach. To this end the site was instrumented to allow for a detailed long-term monitoring of meteorological states and fluxes (above and below the canopy), runoff discharge, groundwater levels, dynamics of soil water content patterns, soil respiration, chemical soil properties, solute concentrations in soil and stream of important elements and stable isotopes, and sediment transport. (source: deims.org)